Cheers to the End of the Alcohol Tariffs! 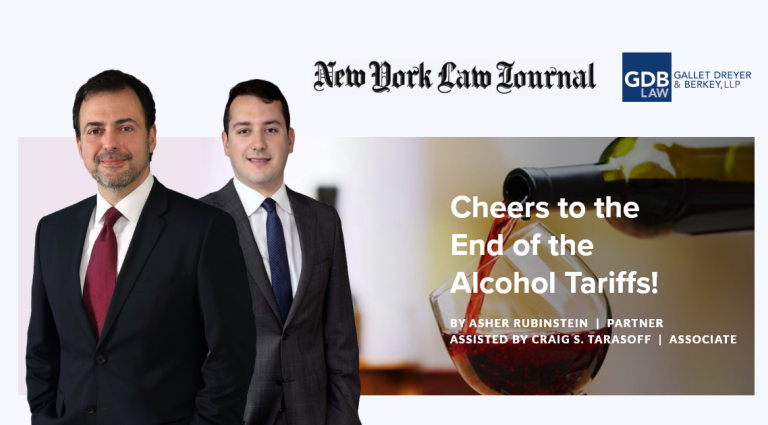 You may have noticed that the price of wine, whiskey and other alcohol products from Europe have been higher lately. This is the result of a 25% tariff imposed by the Trump administration beginning in 2019, based on a dispute with the European Union over government subsidies to the aircraft industry. U.S. importers of alcoholic beverages, along with distributors, retailers, restaurants and consumers, all paid more as a result.

On June 15, 2021, the United States and European Union agreed to a framework to end the trade dispute. There will be no tariffs for the next five years, while the parties work on a comprehensive settlement. Our clients in the beverage and hospitality industries have raised their glasses in celebration, and so should consumers.

Trade Disputes Over Metals and Aircraft Led to Tariffs

In March 2018, citing national security concerns, former President Donald Trump imposed a tariff on imports of steel and aluminum from the EU. In response, the EU imposed a 25% tariff on whiskey imported from the United States, which caused a 37% reduction in exports of American whiskey to the EU, its largest market.

In November 2019, following a trade dispute that began in 2004, the United States won a significant arbitration against the EU before the World Trade Organization (WTO) over EU subsidies to Airbus, the European aircraft company. The United States argued that the EU subsidies violated WTO rules and regulations and caused considerable harm to the U.S. domestic aircraft industry. The United States imposed tariffs on numerous items from European countries, including alcohols, many types of cheese, olives and olive oil, and other foods. The list appeared to be a jumble of tariffed alcohol: wine and whiskey, but not blended whiskey, and not Champagne or beer or wine from Italy. Italy does not produce Airbus planes. Wines from France, Germany, the UK and Spain were tariffed.

The Legal Authority To Impose Tariffs

Article I, §8, Clause 1 of the U.S. Constitution provides that “The Congress shall have Power To lay and collect Taxes, Duties, Imposts and Excises.” If authority was granted to Congress, how has the President obtained this power?

In 1934, Congress enacted the Reciprocal Trade Agreements Act (RTAA), which authorized the President to negotiate bilateral trade agreements and raise tariffs up to 50%. In 1962, Congress passed the Trade Expansion Act of 1962, which allowed the President to enter into trade agreements and modify existing tariffs up to 50% in furtherance of national security. It was pursuant to this Act that former President Trump imposed the steel and aluminum tariffs in March 2018.

Next came the Trade Act of 1974, which authorized the President to, among other things, reduce tariffs up to 60%, and increase tariffs by up to 20%. Under the Trade Act, the President obtains Trade Promotion Authority (TPA) from Congress. TPA is a process by which the President negotiates a trade agreement and Congress introduces implementing legislation to accomplish the goals negotiated by the President. In 2015, the Bipartisan Congressional Trade Priorities and Accountability Act was signed by Congress in a very close vote, with many members of Congress concerned about Congress’ diminishing role in trade negotiations. The current TPA, under this 2015 Act, expired on July 1, 2021.

On June 15, the Office of the United States Trade Representative (USTR) announced a five-year suspension of the wine and alcohol tariffs that have been in place since 2019. News of the announcement is cause for celebration among U.S. alcohol importers, wholesalers, retailers and consumers. The suspension comes at an opportune time, as the restaurant industry continues its recovery from the effects of the COVID-19 pandemic.

However, not everyone is popping corks just yet. First, while there has been a pause in the tit-for-tat tariffs, underlying trade differences remain, which require negotiation and resolution. Second, there are still sticking points to the agreement, which may pose a threat to the suspension becoming permanent. For example, although the United States has relaxed some of its demands, the EU still opposes the U.S.’s stance on obtaining advance notice of the EU’s intent to provide future loans to Airbus and other aircraft manufacturers. Third, the five-year suspension of tariffs will expire in 2026, which is two years into the next Presidential term that could perhaps see a return to nationalistic trade policies.

Importantly, while the framework attempts to resolve the disputes relating to aircraft, and the alcohol tariffs related to that dispute, the steel and aluminum disputes are still pending, along with the tariffs on American whiskey imported to the EU. While these tariffs are supported by U.S. metal producers and workers, the American whiskey industry has faced a one-third decline in its exports to the EU. Before President Biden and the USTR can work toward an agreement to help American whiskey exporters, Congress will have to renew the TPA.

Apart from the U.S.-EU dispute over Airbus and Boeing, another problematic issue is the Digital Services Tax (DST) that some European countries seek to apply against U.S. digital companies, like Google, Apple, Facebook and Amazon, working in the EU. This tax has been called the “GAFA” tax, an acronym for these four companies. In 2019, after France threatened to impose the tax, the USTR countered with a threat of 100% tariffs against luxury goods from France, including Champagne. While this tariff has not been implemented, the dispute is still unresolved and if the DST is imposed in Europe, U.S. tariffs could follow.

It should also be noted that the alcohol tariffs are not limited to the United States and the EU. Multiple trade disputes between the United States and China have included significant Chinese tariffs against U.S. wines imported into China, the fifth largest market for Napa Valley Cabernet. China also tariffs U.S. whiskey at a rate of 25%.

Tariffs have turned the alcoholic beverage industry, on multiple continents, into turmoil and caused harm to many American businesses, in order to punish non-related foreign industries like metals and aircraft. While issues remain, the pause in confrontational trade disputes with Europe and the cessation of costly tariffs is certainly welcome. Let’s raise a glass to a more constructive path forward with our trading partners.