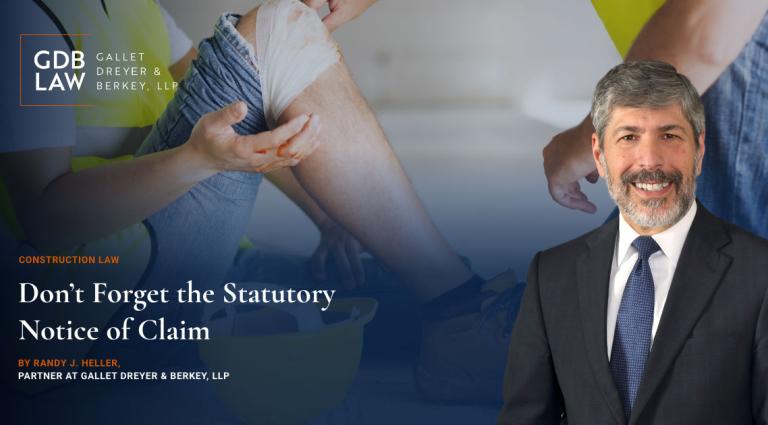 We don’t usually write about personal injury matters.  But sadly, personal injury accidents happen on construction projects. And when an accident occurs on a project owned by a public body, a Notice of Claim must be filed before one can bring suit against the public owner (e.g., State, City, Dormitory Authority, etc.).

What happens if you are late?

There is a salutary purpose in requiring that the notice be served within 90 days.  The public body must be given an opportunity to investigate the conditions before they change. Yet, the General Municipal Law excuses lateness in limited circumstances. It provides that a court may, in its discretion, extend the time to serve a late notice.

In evaluating a request to serve a late notice, the court must consider whether the public body, its attorney, or its insurance carrier acquired actual knowledge of the essential facts constituting the claim within the 90 days, even though the notice wasn’t served.  The court must also consider whether the public body would be substantially prejudiced by being forced to accept a late notice.  The applicant must also give an excuse for the delay.

Here, the laborer initially claimed that his investigations to determine who owned the project site were hampered by COVID.  The court did not agree.  But the laborer demonstrated that after he served his Notice of Claim on the State, the State then sent it (within 90 days of the accident) to the insurance carrier for DASNY.  So DASNY’s insurer had “actual notice of the essential facts” even though the City and DASNY had yet to be served with the Notice of Claim.

And inasmuch as DASNY’s insurer had notice of the essential facts, DASNY itself could not really claim to be prejudiced by late service of the Notice of Claim itself.  Thus, the court permitted the serving of late notice against DASNY.

As for the City (which had not indirectly received a copy of the notice or any other document describing the accident), the laborer had a tougher road.   He argued that the City should be deemed to have acquired notice of the accident because the City owned the site, and that the City created the dangerous condition. But the court wasn’t persuaded – finding that those arguments were speculative and insufficient. So permission to serve a late notice against the City was denied.

Many construction contracts contain notice provisions written into the contract.  Those must be followed to the letter.  But when the claim is based in tort and involves a public body, do not forget about the Notice of Claim statute in the General Municipal Law.  Missing the 90-day deadline can mean denial of a good claim.