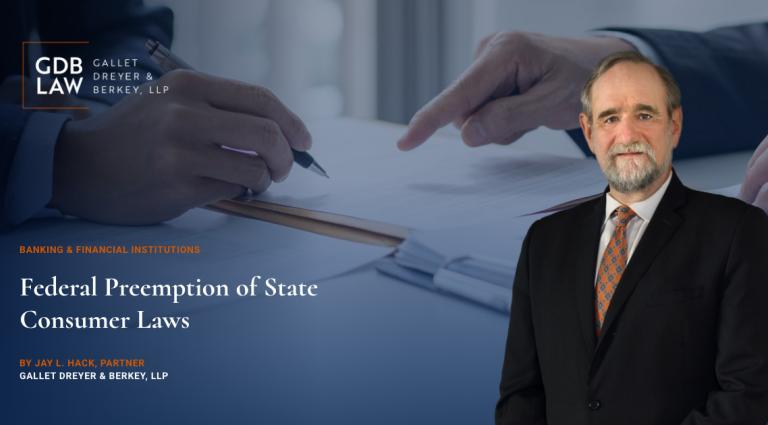 Discrimination against national banks (#1) was unlikely and express preemption (#3) by federal law was easy to spot, so the focus of debate was on #2 – does state law “significantly” interfere with national bank powers. In a decision announced on September 15, 2022, the United States Circuit Court (one step below the Supreme Court) for the Second Circuit (covering New York) decided that the New York law requiring mortgage lenders to pay interest on residential mortgage tax and insurance escrow accounts was preempted by federal law. The court said that national banks were not required to comply with the state requirement. Federal preemption existed even though the economic burden imposed by the low required interest payment might be relatively minor.

In 2018, the Ninth Circuit Court (covering California) issued the exact opposite opinion regarding a very similar California statute requiring the payment of interest on escrow accounts. The US Supreme Court has not weighed in on the subject of federal preemption under Dodd Frank, so the conflict between the circuit courts remains unresolved. Supreme Court intervention may now occur since the Second Circuit and the Ninth Circuit came to completely opposite decisions, which is a hallmark for Supreme Court intervention.

Why did the court hold that New York’s low level of economic interference could still be significant? Because significant can mean “important” or “meaningful” as well as simply meaning “big.” Since national banks were given the power to make loans as a core banking activity, the court decided that the regulation of that lending authority by the states was important or meaningful.

How far does this principle go? It is hard to answer with certainty because each state law or regulation must be analyzed on its own. However, we believe that some New York statutes and regulations will fall by the wayside if the Second Circuit’s analysis is upheld. The most obvious casualty, which had been considered preempted before Dodd Frank, is the New York law prohibiting lenders from passing on 0.25% of the mortgage tax to residential mortgage borrowers. Well before the adoption of Dodd Frank, the courts held that preemption applied so national banks could require borrowers to pay the extra tax.

National banks may be exempt from complying with other New York laws because of federal preemption. Two obvious candidates are (1) the “zombie housing law” which requires lenders with residential mortgages in foreclosure to secure and maintain the property under certain circumstances; and (2) the statute which requires residential mortgage lenders to pay condo common charges and cooperative apartment maintenance during a foreclosure action if the homeowner fails to pay. These statutes impose significant costs on the lender, and, at least in the case of condominiums, they reduce the value that national banks expect from their collateral.

Some national banks do not take advantage of federal preemption in order to maintain competitive equality in the marketplace. Others have decided that the cost of state compliance is too high. However, this is a business decision, not a legal one, and is at the discretion of each bank.

We cannot predict how the courts, Congress and bank regulators will finally resolve the uncertainty, but stay tuned for our future blogs as developments occur. If you are interested in the history of this issue, which goes back to the 1819 Supreme Court case of McCulloch v. Maryland, often discussed in high school civics texts, we would be happy to send you the Second Circuit decision, which includes an extensive review of the history of federal preemption of state law.