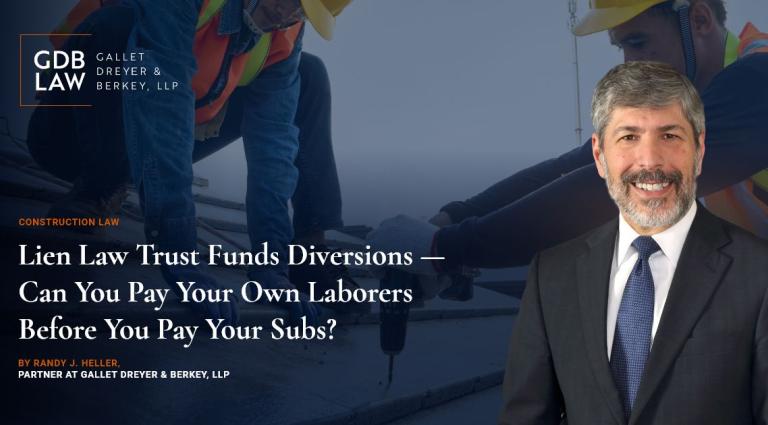 New York’s Lien Law Article 3A creates special statutory safeguards to ensure payment of contractors and laborers on construction projects. The primary purpose of Article 3A is to ensure that those who have directly put labor and materials into the improvement of real property receive payment for the work they performed.

But can the contractor pay its own laborers who worked on that project before paying its subcontractors and vendors on that job? Is that an unlawful diversion of trust assets? A recent federal court case holds that it is not a diversion.

Interestingly, a trustee may “favor” one beneficiary in a class over another beneficiary in the same class.  There is no requirement of equal treatment (or pro rata distributions). If the contractor wishes to pay in full one of its subcontractors while withholding some payment from another subcontractor, that is fine with Article 3A (although it might violate other aspects of construction law or constitute a breach of contract). So long as the trust funds are used on the same project and for an acceptable trust purpose, there is no requirement that beneficiaries be treated equally.

But shouldn’t that be considered a payment to the contractor itself, which is improper so long as other trust beneficiaries remain unpaid? The federal district court judge, in a 43-page decision, explained that a “vital distinction” must be made between payments to a corporate entity and to the individuals who work for it. Payment to the individuals ends up in their pockets, not the contractor’s. As the judge concluded, that distinction matters under Article 3A. Nothing in the statute requires the trustee to pay outside subcontractors before paying inside laborers.

But what is the real takeaway here? If a corporation uses any trust funds to pay itself any “profit” on the job before each and every trust fund beneficiary is paid in full, that may be considered a trust fund diversion which is unlawful. Stated another way, until everyone a contractor has retained (subcontractors, suppliers, laborers, consultants, engineers, IRS, etc.) has been paid in full, there is no such thing as “profit.” When a contractor takes trust funds off the job for its own use, before everyone else it employed is paid in full, it risks personal liability and potential prosecution for a criminal act.