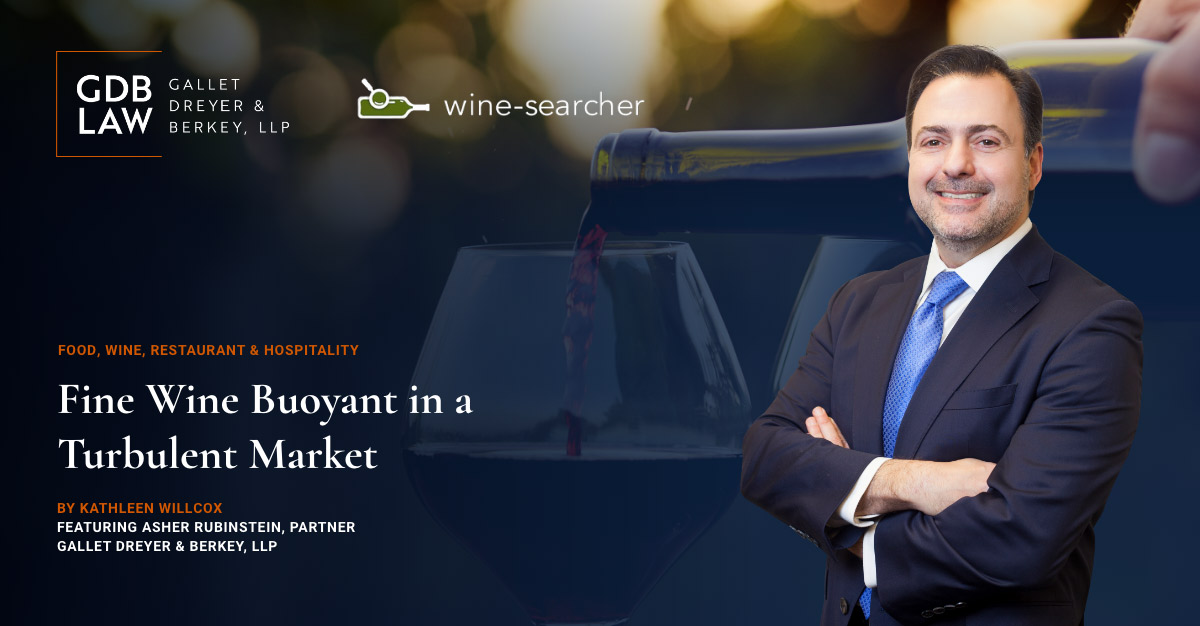 The premium wine sector is a go-to for high-net-worth individuals looking for hedge.

The world’s top wines have been steadily increasing in value despite the choppy economic conditions.

The global economy has been on a stomach-churning roller-coaster ride this year with higher-than-expected inflation and increased interest rates in the world’s three major economies: the US, China and the Euro zone.

In many areas of the economy – real estate, home goods, electronics, personal care and appliances – sales are stagnating. But interestingly, fine wine is not only very much in demand, some experts say that investing in fine wine makes an excellent hedge against the kind of turbulence we’re seeing right now.

The price of wine, on average, is remarkably stable right now, considering what's going on in other sectors of the economy.

Unlike, say, the price of fuel (which was up by more than 106 percent year-over-year at certain points this year, according to the consumer price index), airline fares (up more than 37 percent) or men's outerwear (up more than 22 percent), the price of wine overall is actually going down.

While wine prices overall remain relatively stable, the wines that are selling best land at the pricier end of the scale.

According to the 2022 Q2 DTC Report from Enolytics and Wine Direct, luxury wines priced $90 and up enjoyed a 32 percent bump in sales, while bottles priced $20 and lower were down 1 percent.

“The more expensive the wines, the bigger the share of male boomer consumers,” says Chris Huyghe, co-founder and lead analyst of wine data aggregation service Enolytics. "Many of them tend to be collectors and they are less influenced by economic factors. The lower priced wineries have a larger Millennial and female consumer base who have a lower disposable income, which is therefore more affected by economic factors.”

Individual, small-volume wineries, like the 1000-case Wentworth Vineyard and Ranch in the Anderson Valley, enjoyed a year-on-year increase in sales of 240 percent.

"There is a greater demand for the wines that I'm making than we have seen previously," co-founder Mark Wentworth says. "Granted, my business is relatively young and there are many factors driving growth, among them, most notable, I think our wines are very good. And the story of planting vines on raw land as opposed to buying grapes is intriguing to many, as is our organic farming and support of conservation work.”

Wentworth, whose wines retail for $52-$114, notes that the strongest growth is DTC and wholesale channels through distributors.

For the 8400-case Seña, a collaboration between Eduardo Chadwick and Robert Mondavi in the Aconcagua Valley, Chile, the sales are up 25 percent year-over-year. Seña offers one wine – the Seña 2020, priced at $150 a bottle.

"We are seeing a very positive trend in the US and Asia,” says Michel Couttolenc, vice president of Seña's sales and marketing. "We strongly believe the US premium market has a big potential for us, and we are just beginning to tap into it.”

The typical person who opts for a nice bottle of niche wine on a random Tuesday has, arguably, more spending power than ever.

The gap between the ultrarich and everyone else grew during the pandemic, with the world's 10 richest men doubling their fortunes from $700bn to $1.5 trillion during the first two years of the pandemic, a report from Oxfam International reveals. (That accounts for an accrual rate of about $15,000 a second).

The spendy habits, despite the dire economic outlook, will likely continue apace. Sales of luxury goods, from high-end watches to bottles of Château Mouton-Rothschild, are set to rise 5 percent this year, consultancy Bain predicts.

In addition to buying up delicious bottles of DRC, the ultra-rich are now looking at wine as a way to balance out their portfolio of holdings. (Ultra-high-net-worth investors, or those with $30m-plus, have, on average, about 50 percent of their assets in alternative investments like art, precious metals, real estate and wine).

Investors eager to avoid some of the turbulence of the stock market have been seeking out alternative investments. Cryptocurrency had its day, but interest in collectibles – like art and wine – is on the rise.

"When the stock market goes up, rare wine tends to rise more, and when stock goes down, rare wine may go down a little, but not nearly as dramatically," notes David Parker, the founder of the rare wine buyer and seller Benchmark Wine Group, which is based in Napa.

There are several ways to invest in wine, Parker explains: through wine stocks or ETFs like LVMH, through wine investment funds like Vinovest, or through individual acquisitions of blue chip wines.

"Which you'll obviously want to buy by the case," Parker notes.

And for many, the interest in investing in wine goes beyond their bottom line.

"The majority of fine wine buyers view their collections as both a consumable and a collectible," something that is increasingly of interest to investors looking for cash to park somewhere," says Justin Gibbs, deputy chairman and exchange director at Liv-ex. "The first, because they are passionate about what is in the glass and like to drink it, the second, because they recognize it as a store of value. Its relative scarcity (which only grows as the years pass) and its tangibility mark it out as a genuine alternative to, say, equities and bonds. It is thus regarded as a portfolio diversification tool. Its tangibility becomes particularly attractive in times of inflation where paper money loses its value over time.”

For high-net-worth individuals in the US and Asia, now is a great time to start or round out an investment-grade collection of wine.

"Sterling's weakness against the Dollar means fine wine prices are becoming more affordable to American and Asian buyers," says Gibbs. "The Dollar has been strengthening against Sterling. Over one year the GBP: USD exchange rate has dropped from $1.38 to $1.16. This drop is reflected in the prices of fine wines. Measured in Sterling, wines listed on the exchange at present are 15.9 percent cheaper for Dollar buyers than they were in December of last year.”

Over the summer, for the first time in two decades, the Dollar and Euro also reached parity.

If you are thinking about investing in a collection of wine, Asher Rubinstein offers a few guidelines. Rubinstein is a trust and estates attorney with Gallet Dreyer & Berkey in New York, and advises high-net-worth individuals on, among many other things, their wine collection.

"Not every wine will appreciate in value," Rubinstein points out. "You want to make sure you invest in blue chip wines: Burgundies like Domaine de la Romanée-Conti, Champagnes like Cristal, Tuscans like Biondi Santi Brunello di Montalcino, Bordeaux First Growths like Latour, and unclassified Right Banks like Petrus. A few from Napa, like Harlan and Screaming Eagle."

You want to buy multiple cases, have a rigidly planned out time horizon – typically five to 20 years – and plan to sell it within its drinking window. Allocate funds for insurance; proper storage conditions ideally not in your own home; ensure there is a chain of provenance and paperwork from your storage facility explaining temperature and humidity levels. When you do sell, likely through an auction house, make sure to report earnings when you file taxes, he adds.

Rubinstein says that he has seen his clients' investments bring in well north of 20 percent return-on-investment, even after costs and the taxes you have to pay on capital gains are accounted for.

"Investing in wine is slow and steady, whereas the stock market has so many peaks and valleys," Rubinstein notes. "It provides diversification to your portfolio, but it's also more interesting. I think fine wine investment is drawing a completely new type of investor because it involves history, geography, climate change, even the aristocracy. And you can drink it if all else fails!”

"Scarcity is part of fine wine's inherent value," Rubinstein admits. "Most of the blue chips have waiting lists.”

Working with rare wine retailers like Benchmark is an option though.

"We have the largest inventory of investment-grade wines in the country," Parker says. "We have about 16,000 SKUs, and high case-availability. We work with producers directly, and can source from rare wine brokers. Plus, we have a sales staff who can advise high-net-worth individuals on purchasing choices and storage.”

As with any investment, fabulous returns are often the result of an unpredictable combination of intelligent foresight, educated guesswork, market conditions and dumb luck.