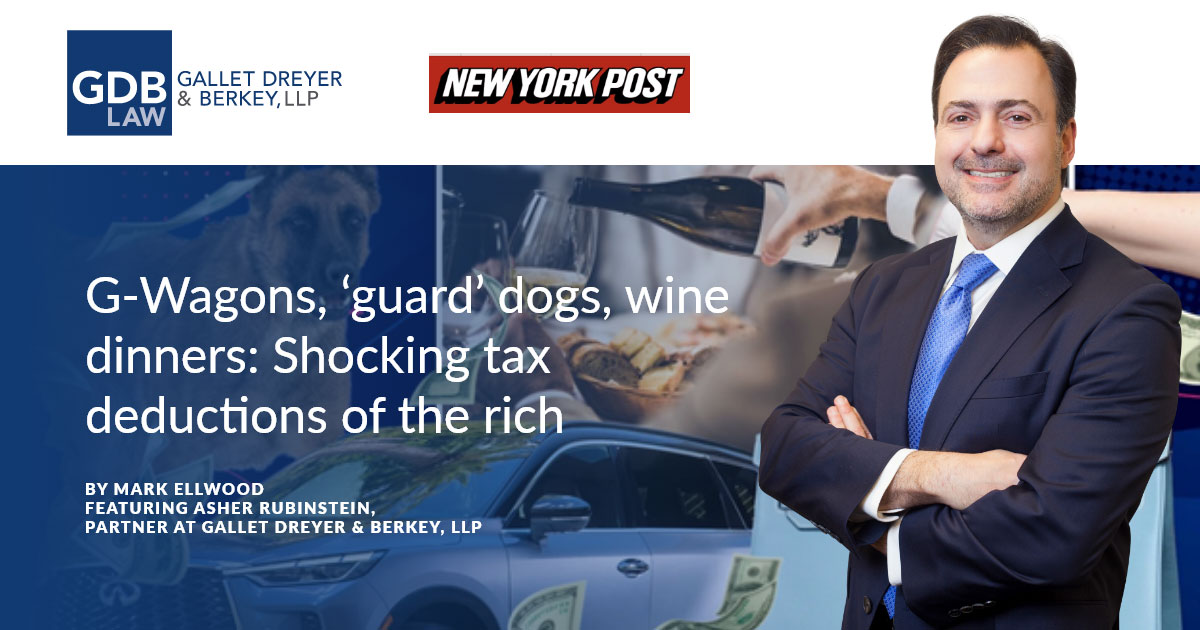 There are loads of luxury loopholes this tax season — including write-offs for SUVs, fancy meals, and more.

Costing more than $160,000, G-Wagons are hardly what most people would think of as a bargain — but for the wealthy, these luxury SUVs are rolling tax loopholes.

The so-called “Hummer Deduction,” Section 179, allows a car that weighs at least 6,000 pounds to count as a tax benefit in some circumstances. Snap it up via your company, use it for business at least half the time, and that Mercedes G-class — or Cadillac Escalade (starting at $76K) or Infinity QX80 (from $70,000) — could earn a $25,000 deduction the first year of ownership.

The IRS treats such rides as depreciating assets, allowing for the offset, though the benefit wasn’t originally intended to help out high rollers, according to Scot Hall of Swapalease.com. It was actually meant for farm equipment like tractors; as our cars have gotten heavier, the tax code has failed to keep up.

“It’s a provision to incentivize businesses to purchase new equipment,” Hall told The Post, “The higher the vehicle weight, the more likely it is to be a heavy-duty pickup. These days, though, there are more vehicles than people think that sneak up to qualify.”

The “Hummer Deduction,” Section 179, allows a car that weighs at least 6,000 pounds — such as a Cadillac Escalade (above) — to count as a tax benefit in some circumstances.

The “Hummer Deduction” isn’t the only 100 percent legal workaround that wealthy Americans use to offset their upscale lifestyles against Uncle Sam’s bottom line, according to Asher Rubinstein, a partner at NYC-based Gallet Dreyer & Berkey and a seasoned pro in asset protection tax practice.

Take the “Augusta Rule,” its name a nod to the Georgia town where homeowners have long rented out their mansions during the PGA’s spring Masters tournament there.

In the 1970s, residents lobbied the Feds to allow them to do that for a brief period every year without operating as rental businesses — or paying taxes on what they charged. Now anyone who owns multiple estates can rent out their primary residence at market rate for up to 14 days a year and bank the profits tax-free.

The “Augusta Rule,” named for the Georgia city that hosts a PGA Masters tournament (above), lets estate owners rent out their primary residence at market rate for up to 14 days a year and bank the profits tax-free.

There’s another loophole — the one-percent equivalent of extreme couponing, that can be stacked on top of that, per Rubinstein.

“Rent [your home] out to your business for a corporate retreat or monthly board of directors meeting, and now the rental payment is deductible to the business, and income-tax free to you,” he said. “It’s like a bonus on both ends.”

Another temporary bonus Rubinstein encourages everyone to recognize right this tax season: Business meals, which were traditionally 50 percent deductible, can now be fully counted off — a government gesture to try to juice pandemic-hobbled restaurant checks.

Business meals, including pricey ones at places like Le Bernardin (above), where a chef’s tasting menu can cost up to $440, can now be fully counted off — a government gesture to try to juice pandemic-hobbled restaurant checks.

“This was a lifeline Congress threw the restaurant industry,” he said of the measure that expires at year’s end. It means that even first growth Bordeaux and a four-course prix fixe at Daniel qualifies, as long as the meeting-and-eating was business-related.

Got a closet full of Birkins or a couple of prized Picassos? There’s a tax workaround for that, too. You can establish your own family 501 (c)(3), then donate the luxury goods to that new foundation. The donation earns a tax deduction, and the foundation doesn’t pay tax when it sells the goods.

Rubinstein has set up client systems like this for everything from sculptures to stocks; crypto-rich types are now asking if it’s applicable there, too.

Donating assets with a profit to a charitable remainder trust — your own personal 501(c)(3) — helps you to avoid capital gain taxes.

Here’s how such systems work: Say you bought Apple stock at $50 and it’s risen to $150. Selling those shares the regular way will trigger capital gains tax on the $100 profit. But if you donate those shares to a charitable remainder trust — your own personal 501(c)(3) — the tax situation’s much better after selling them.

“You can get distributions on an annual basis, as long as you can demonstrate that 10 percent of the amount will go to a qualified charity at the term of the trust,” Rubinstein says.

It works the same way for any appreciated asset, like a painting or bag that ticks up in value each year: A family-controlled 501(c)(3) turns a luxury good into a do-gooding gesture.

A family-controlled 501(c)(3) can turn a luxury good, like a Birkin bag, into a do-gooding gesture.

Wanna offset the cost of a high-end family pet? There’s a chance to do that if the dog is a security animal, per Rubinstein. And when you’re spending six figures on a dog, that’s a welcome abatement.

Greene owns and runs Svalinn, a Montana-based dog breeding and training company that’s like a canine Quantico. Well-trained graduates cost $125,000 each and do double duty as adorable family pets and protection officers, primed to detect danger before it happens.

“Quite a few people purchase dogs as a business expense, because it’s a justifiable security asset,” Greene told The Post. Like the Florida jeweler who keeps a Svalinn dog at her side in the store and as she walks to her car late at night. Doctors are common clients, too, she says, keen to have protection from a surprise visit by a disgruntled former patient.

A security dog, such as the ones bred and trained by Kim Greene, can net you big savings during tax season.

“Unlike a simple pet dog, your personal protection dog goes with you everywhere you go. It’s your guardian angel,” Greene said.

“Some people might argue you’re depriving the government of revenue, so there’s an ethical obligation,” lawyer Rubinstein said, “But high net worth individuals are taking advantage of legal loopholes. If you’re having a business meeting with clients, why should the deduction be capped at a bottle of mediocre wine from Sonoma? Why can’t we open First Growths, and deduct them instead?”