They Are Not Called "Consequential Damages" For Nothing 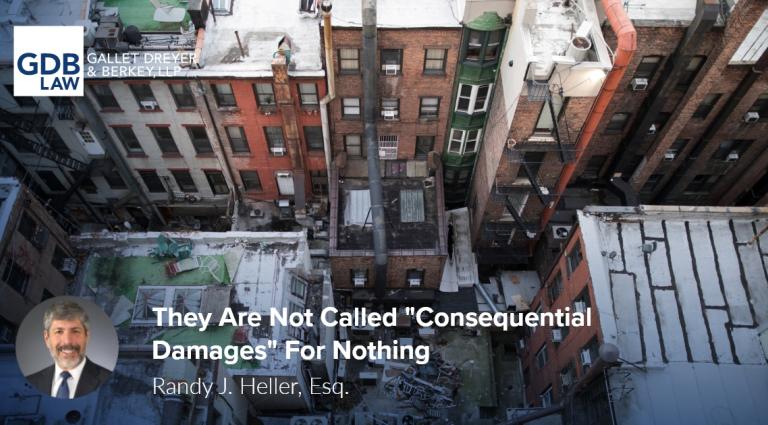 In order to be recoverable, damages resulting from a breach of contract must have arisen “as a consequence” of the breach. But “consequential damages” are a horse of a different color, and not so easily understood. A recent case reminds us why the courts treat them quite differently.

While all damages must be a consequence of the breach, the term “consequential damages” has come to be associated with those damages which are so unforeseeable and remote as to be beyond the contemplation of the wrongdoer and, therefore, often not recoverable. For example, when a contractor breaches a contract by abandoning the project, he might expect the Owner to incur damages in completing the project with a more expensive contractor. But does he really expect his liability to include the money lost by the Owner for not being able to rent the premises for a lucrative movie shoot?

Taken to its extreme, the damages resulting as a consequence of a breach can be endless. A juror once told me that he was convinced that an incompetent pool contractor was responsible for destroying his marriage. That might well be true, but is it a damage for which the pool contractor should be financially liable?

A recent case in the Supreme Court, New York County, illustrates the principle. The Owner of an apartment building on West 175th Street in Manhattan hired New Founders Construction LLC (the “Plumber”) to renovate three apartments. Payment disputes regarding change orders arose and the Plumber abandoned the project.

Before the Owner could hire a replacement plumber to complete the work, the laws changed. The Housing Stability and Tenant Protection Act went into effect, preventing Owner from deregulating the three apartments. The rents in effect prior to 2017 could no longer be increased (approximately $1300 per month each). The Owner sued the Plumber for $612,000, representing ten years of lost rental income for the three units at what would have been the higher, deregulated rent.

These damages certainly were a natural “consequence” of the breach. But the court concluded that they were consequential damages and refused to award them to the Owner. The court explained that damages for breach of contract must be “the natural and probable consequence of the breach.” But they must also be “within the contemplation of the parties as the probable result of a breach at the time of or prior to contracting.” One way they can be deemed “contemplated” is by making mention of them in the contract itself. But the contract was silent about the change in law and it was silent about the treatment of consequential damages as well.

The court stated that there was no evidence showing that at the time the contracts were executed loss of future rents based on the Owner’s inability to deregulate the apartments was within the parties’ contemplation. Even the Owner did not claim to have known about the impending change in law when it signed the contract. So even though the court held that the Plumber had breached the contracts, it held that the Owner had failed to prove its entitlement to any damages.

The Plumber was lucky in this case. The risk of being liable for consequential damages is significant. Might the loss of the previous (regulated) rental income been deemed to be within the contemplation of the parties? How about extended carrying costs on the Owner’s building loan? A court may well have assessed those damages against the Plumber if the Owner had thought to offer proof of them.

Construction lawyers often seek to include a “waiver of consequential damages” clause in contracts involving their construction clients to prevent the Owner from bankrupting the contractor with virtually limitless unforeseen and remote damages.

Relying on luck and a sympathetic judge is not a plan. Where legal terms of art often do not mean what you think they mean, it essential to have an experienced attorney on board.