When Is A Liquidated Damage Clause An Unenforceable Penalty?

A homeowner wanted to develop his West Greenwich Village townhouse and entered into a License Agreement with his neighbor so that the development might permissibly proceed. The neighbor agreed to move out during the construction. The License Agreement, negotiated between attorneys, provided that the developer would pay $1000 a day in liquidated damages if he did not obtain a temporary certificate of occupancy for his work (and finish) within 18 months. The developer was 318 days late.

When the neighbor sought to enforce the liquidated damage clause of the License Agreement, the developer claimed the $1000 a day charge was a penalty and, therefore, not enforceable. The New York Appellate Division, in Seymour v Hovnanian, held that since the charge was not grossly disproportionate to the neighbor’s estimated damages, the daily liquidated damage rate could properly be assessed.

There’s more to this than meets the eye. The developer was Ara Hovnanian, president of Hovnanian Enterprises Inc., a major home and condo builder. The neighbor was Whitney North Seymour, Jr., former US Attorney for the Southern District of New York. Seymour had a rent-paying tenant on the upper floors of his townhouse (who moved out). Seymour’s estimated loss of use of the townhouse (including tenant’s rent) was determined to be $430 a day. Still, this was not $1000 a day.

The developer argued that this was a penalty and well in excess of a genuine estimate of Seymour’s actual damages. However, the appellate court held that it was not so grossly disproportionate to actual damages as to be a penalty. “Liquidated damages will be sustained if, at the time of the contract, the amount bears a reasonable proportion to the probable loss and the amount of actual loss is incapable or difficult of precise estimation…. If the amount is grossly disproportionate to the probable loss, the provision is a penalty and courts will not enforce it.”

The test remains vague. Is the liquidated amount punishment or compensation for damages? Imagine a contractor constructing a manufacturing plant with an anticipated revenue of $1,000,000 a day starting from day one. A liquidated damage amount of $3,000,000 per day for delay in completion might well be punishment. On the other hand, suppose one parks a car in a pre-paid self-parking lot for a shopping center for $2 with a maximum time allowed of 2 hours. The shopping center wants short-term, not lingering, shoppers. The driver is warned that if he overstays, he will be liable for $50 for the overstay. The overstay charge is 25 times the rate, but the total amount involved is not so extreme.

Whether a liquidated damage amount is an unenforceable penalty is not determined by proportion alone. Among sophisticated parties in an arms-length transaction, the amount must be so unreasonable in light of the estimated loss that a reasonable man would say that it shocks the conscience. 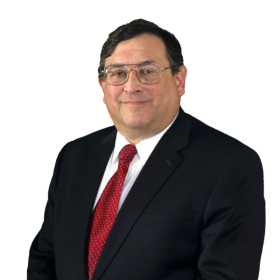 ​Mr. Goldberg has practiced construction law for over 40 years on all sides of the construction triangle (contractor owner designer), including materialmen, engineers retained by architects, inspectors approving the release of monies under building loans, and sureties. He emphasizes insurance coverage in his handling of matters.