Is Your Arbitration Governed by Federal or State Law? Does it Matter? 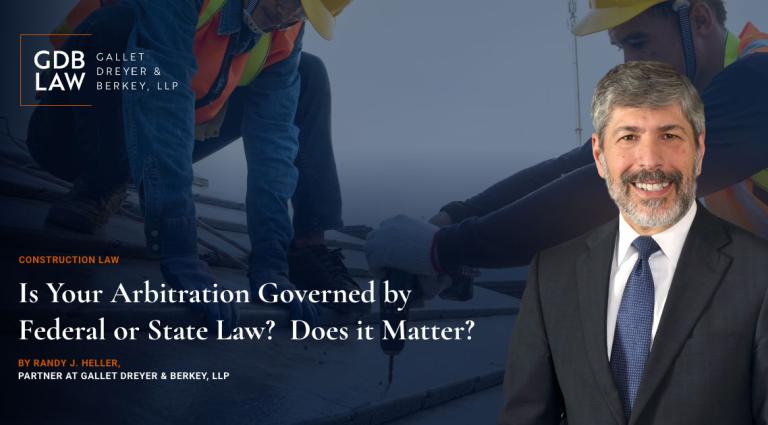 Many contracting parties, when drafting their contracts, give some consideration to whether their disputes should be resolved by litigation or arbitration. If they opt for arbitration, many grapple with which entity should administer the process (e.g., AAA or JAMS). But few parties give any thought to whether federal law should govern (Federal Arbitration Act, 9 USC §1) or whether state law should apply (Article 75 of the NY Civil Practice Law and Rules). A recent case illustrates why it matters.

Plaintiff Vitiello (“Vitiello”) entered into a contract for the construction and sale of a new home in Saratoga Springs, New York. The defendant builder, LNAA Construction, LLC (“LNAA”), incorporated a limited warranty into the contract of sale.  The warranty was to be provided by Home Buyers Warranty Corporation (“HBWC”).  The warranty contained a clause stating that “any and all claims, disputes and controversies” would be settled by “binding arbitration.” It went on to say that such arbitration would be governed by the Federal Arbitration Act (“FAA”).

As you might have already guessed, Vitiello encountered various construction defects and commenced arbitration against LNAA to have the repairs covered by the warranty.

Before revealing the results of that arbitration, let’s note a strange wrinkle in the NY General Business Law (“GBL”) which addresses warranties and arbitration. One section of the GBL discusses the statutory “housing merchant implied warranty” deemed to be included in many residential sales of new construction. It provides that a builder/seller may opt out of such implied warranty provided it substitutes a limited warranty fulfilling many conditions (not relevant for this discussion). One of those conditions provides that where there is a limited warranty, the buyer “shall not be required to submit to binding arbitration or to pay any fee for participation in nonbinding arbitration or mediation.” Vitiello was apparently unaware of this section when it demanded arbitration.

Now let’s return to our saga, already in progress. In the arbitration commenced by Vitiello, the arbitrator found that the warranty did not cover the defects and directed Vitiello to pay a portion of the total costs of the arbitration.

Unhappy with the results in arbitration, Vitiello ran to court and sued LNAA and HBWC for breach of contract and warranty, promptly moving for summary judgment. The lower court found disputed issues of fact requiring a trial about whether the warranty was breached, but held that the provision requiring Vitiello to submit to binding arbitration, and to pay the arbitration fee, was void (pursuant to the GBL).

Vitiello then commenced a separate action—a class action—seeking to get back the fees it paid in the arbitration—on its own behalf and on behalf of everyone else who had ever been forced to pay arbitration fees in disputes with HBWC.

The lower court dismissed the class action and held that it was proper to compel Vitiello to bring its claim in arbitration. On appeal, the decision below was upheld. But why? What about the prohibition in the GBL? The answer can be found in the distinction between the federal and state arbitration laws.

In disputes between parties located exclusively in New York, where there is an arbitration clause which is silent about the choice of law, the NY arbitration law will generally apply by default. If the parties specify in their contract that the federal act applies (as was the case in the HBWC warranty), then the FAA will apply.

When the arbitration clause is silent as to which law applies, but where the contract “involves interstate commerce,” the federal act will apply. The FAA evinces Congress’s intent to establish an emphatic national policy favoring arbitration which is binding on all courts (both state and federal). In this case, not only had the parties agreed to the application of the FAA in the warranty, but the court found that with HBWC headquartered in Colorado and Vitiello in New York the warranty contract indisputably affected interstate commerce. As an aside, even with both parties located in New York, interstate commence can sometimes still be implicated based on the nature of the materials used in the construction, where they were sourced, the manner of transportation across state lines, etc.

Here’s the kicker: when there is a conflict between the FAA (favoring arbitration) and a conflicting law (say, the GBL, prohibiting a homebuyer from being forced into arbitration), “the conflicting rule is displaced by the FAA.” So, Vitiello was required to participate in arbitration, pay the required fees, and be bound by the result--all based upon the applicability of the FAA to this NY transaction and warranty “affecting interstate commerce.”

While the FAA and the NY arbitration laws are not dramatically dissimilar, the FAA’s strong preference for arbitration can sometimes dictate the result. Besides  displacing conflicting rules, the FAA permits a much broader right to challenge an arbitrator’s jurisdiction, without requiring the court to give any deference to the arbitrator’s decision.

So, when drafting contracts, some consideration should be given to which law will apply in arbitration. The ultimate outcome of the dispute could rest on that choice.