Think, Before Threatening Not to Perform 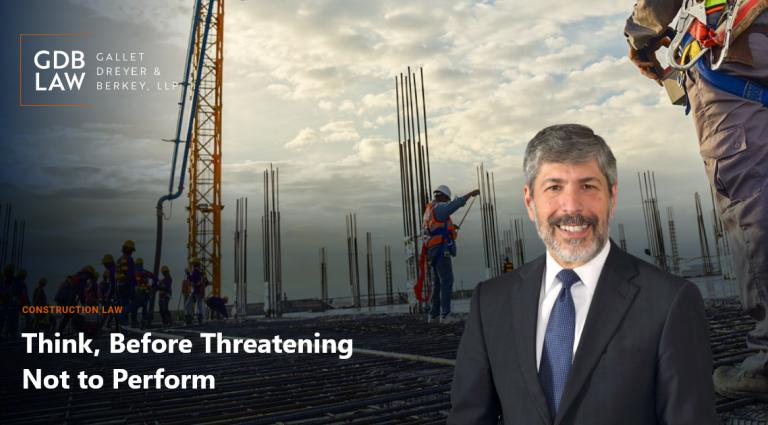 This life lesson comes to us from the County of Rensselaer, outside of Albany. On a project to construct a train station for Amtrak, Banton Construction Company hired McCarthy Concrete, Inc. as its concrete subcontractor. The subcontract contemplated the use of poured concrete to extend a train station platform, with payment based upon unit prices. Of particular note, the subcontract contained 11 exclusions, including, “concrete pumping” and “tactile strips.”

There had been an earlier dispute between the parties arising out of a project suspension that Amtrak ordered so the parties were already not on the best of terms. After work resumed, and in an effort to accelerate the work, Amtrak directed that concrete be pumped, rather than poured. They also required the addition of the tactile strips at the platforms’ edge.

Banton directed McCarthy to do the extra work in writing and McCarthy reluctantly submitted its proposals for the added cost. When the parties could not agree on a price, McCarthy dug in its heels and would not do the extra work without a written change order containing an agreed price. Banton was willing to pay for the added cost of the pumping (subject to a reservation of rights), but not for some tangential costs McCarthy was insisting upon. McCarthy pointed to the exclusions in its subcontract and argued that had it known it was going to have to pump concrete and add the tactile strips, its unit prices would have been very different.

Ultimately, Banton gave McCarthy a 3-day notice to proceed with the work, and when McCarthy refused, Banton terminated the subcontract and had the work performed by a different subcontractor. McCarthy sued for wrongful termination and Banton counterclaimed for the additional cost to complete McCarthy’s work.

Following a non-jury trial, the court held for McCarthy, stating that the change from pouring to pumping concrete was a “material change.”

On appeal, the appellate division reversed, holding that by refusing to do the extra work once directed, McCarthy had breached the subcontract and was properly terminated. The court focused on a clause found in nearly all prime contracts and subcontracts—requiring the subcontractor to “immediately perform the work as changed without delay” and emphasizing that “pending resolution of any claim, dispute or other controversy, nothing shall excuse [subcontractor] from proceeding with the prosecution of the work.”

In essence, the contract requires one to “work now and dispute later.” There is a logical reason for that proposition: the costs attending project delays are so great, there is little justification for holding up the whole job while fighting over the value of a change order. Of course, overlooked in that process is the harm to the subcontractor who can often ill afford to finance the extra work while waiting to recoup its costs (five years until resolution of this case!).

One other wrinkle arose in this case. McCarthy argued that the change from pouring to pumping concrete was a “cardinal change”—i.e., a change so significant as to affect the “essential identity or main purpose of the contract, such that it constitutes a new undertaking.” Had the change been deemed “cardinal,” McCarthy would have been excused from having to perform that work and its refusal would not have been a default under the subcontract. But, although the trial court found that change to be “material,” the appellate court held that it was not material enough to constitute a “cardinal change.” The change did not “fundamentally change the purpose of the work.”

Not infrequently tempers flare on a construction project and a subcontractor faced with money issues may be tempted to invoke the nuclear option—refusing to perform until its demands are met. This is rarely a wise move. As the appellate court reminded us all, the wiser course is to work now and dispute later. If you do not, you will likely be held in default and will be responsible to pay for someone else to complete your work.