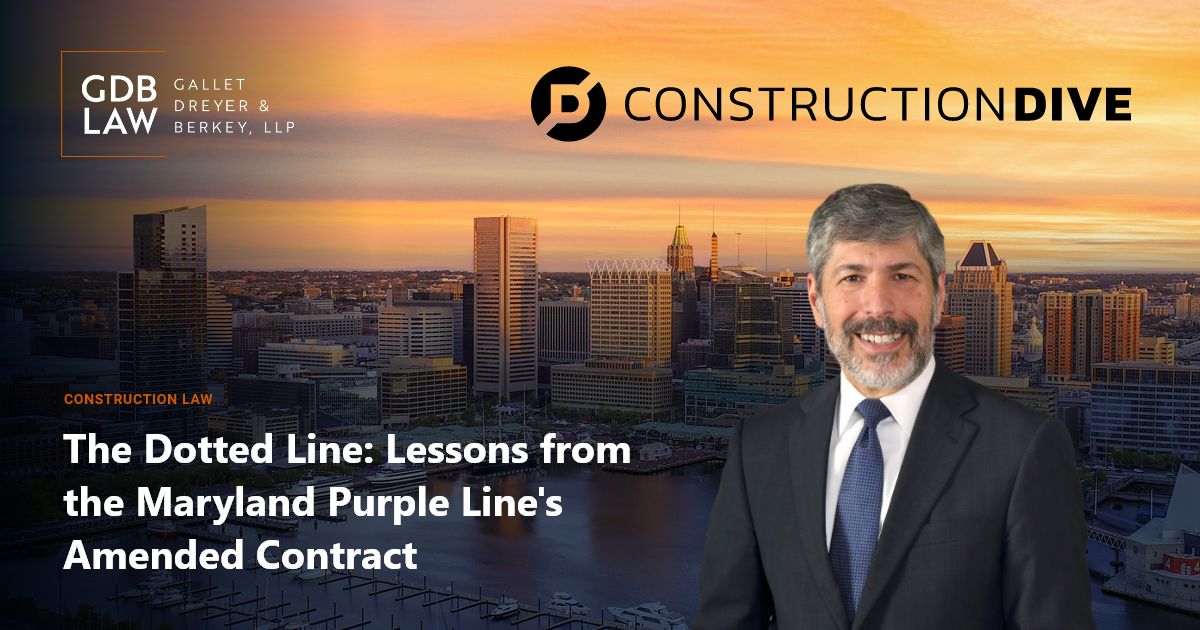 The light rail project could serve as a model of what to avoid in complicated P3 infrastructure initiatives.

This feature is a part of "The Dotted Line" series, which takes an in-depth look at the complex legal landscape of the construction industry. To view the entire series, click here.

Maryland's much-delayed Purple Line is getting a contractual do-over.

The Maryland Board of Public Works approved a modified agreement in January to tap Dragados USA and OHL USA, the American subsidiaries of two major Spanish construction firms, as the new design-build consortium on the project.

Construction attorneys say the modified public-private partnership (P3) agreement has the potential to set precedent for other closely watched public works projects, particularly as funds from the $1.2 trillion Infrastructure Investment and Jobs Act flow to the states.

"This is the type of project that everyone in the business is aware of," said Mark Himmelstein, a partner in the Newport Beach, California, office of Newmeyer Dillion. "Lawyers will hold panels about what went wrong, and how to prevent that from happening in the future."

Operating as Maryland Transit Solutions (MTS), Dragados and OHL will now take over where Purple Line Transit Constructors, the light rail project's original contractors, walked away after an acrimonious and public dispute about cost overruns and time delays.

That group, made up of Fluor, Lane Construction and Traylor Bros., took the highly unusual step of quitting the infrastructure job before it was complete. A Maryland judge allowed the group to exit the deal in late 2020, pointing to "clear, direct and absolute" contract language that gave it the right to walk if a dispute lingered more than a year, which it had.

In announcing the modified agreement with MTS, the Maryland Department of Transportation emphasized that language had changed.

"The contractor can conditionally elect to terminate in the case of an extended force majeure event that is out of the control of either party, such as war, an act of terrorism, fire and flood, but that is not a unilateral right and the owner can elect to continue in that event," the release said.

The new agreement also added an additional $1.4 billion to the cost of the project, with an estimated completion date of 2026. The new price tag of $9.3 billion is 66% higher than the original $5.6 billion contract from 2016, and the project is more than four years behind schedule.

While the modified agreement breathes new life into the Purple Line, and keeps a project going that Maryland officials can't afford to get derailed again, construction attorneys say it's the original pact that was unusual. In giving the contractor the right to walk, particularly in the context of a public works project, it stood out.

"A contractor would virtually never have the right to stop work, with the exception of nonpayment," said Randy Heller, a partner at Gallet Dreyer & Berkey in New York. "Any heavy-duty contract would have a clause that specifically says no matter what happens, no matter what the dispute, finishing the job is so important that you may not stop work for any reason."

The P3 exception to the rule

The wrinkle for the Purple Line is that it's being built as a P3. In these types of agreements, private entities agree to take on a part of the cost associated with building a public works project, in return for a piece of the revenues it generates. For example, Purple Line Transit Partners, the umbrella group that holds the concessionaire contract on the project, will operate and maintain the 16.2-mile, 21-station line for 30 years.

But in order to get private enterprises to assume that risk, P3 contracts are often less onerous than straight public works agreements, where the government entity unilaterally calls the shots.

"You can't as easily ram your contract down their throat," said Heller about P3 agreements. "Now the contractors get to sit at the table and negotiate. And obviously, one of the conditions on the first agreement was the ability to walk away if things really went south."

The challenge of megaprojects

Another unique aspect of this project is its size and scope. Attorneys say only so many major construction players have the resources to take on these types of megaprojects. Of those, some may choose not to bid at all.

That was the case with the Purple Line's second round RFP, where three groups were short listed to bid, but only two – the winning Dragados-OHL team and a joint venture from Tutor Perini/Lunda – actually submitted proposals. A third team, Halmar International, opted not to move forward.

That limited market factors into how much leverage the government owner entity has on these jobs. For example, Ron Perini, Tutor Perini's CEO, made it clear on the firm's latest earnings call that he'd rather bid high on a mega contract and lose than underbid it and own the risk at a lower margin.

"If we're going to add $5 billion or $6 billion worth of civil work to our backlog and it takes five to six years to build it, nothing would be more foolish than for us to cut our margins in order to acquire it," Tutor said. "It'd be exciting when you got it, and then you'd live with it for the next five, six years."

Granite Construction has also publicly stated that it has pivoted away from targeting megaprojects with budgets of more than $500 million.

"There have been some fairly public departures of the larger contractors who have said projects of this magnitude are not consistent with their risk appetite," said Michael Subak, a partner in the Philadelphia office of Troutman Pepper. "It's no surprise that some are dropping out."